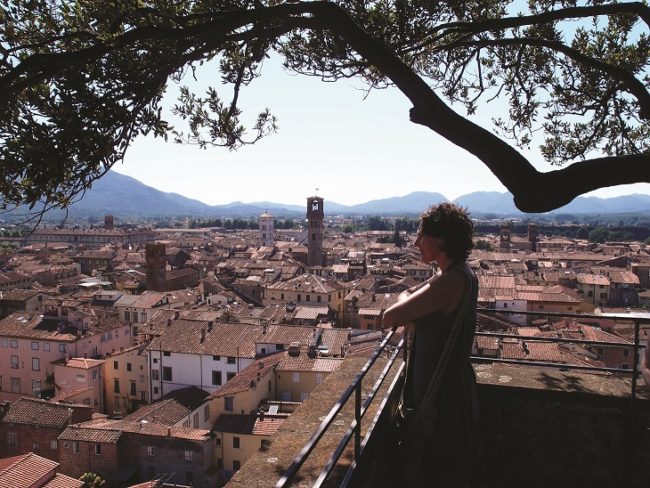 Repose is one of those old-fashioned words, like eventide or winsome. It conjures an era when there was time in the day for restful contemplation.

Is that why we don’t hear it anymore? Because we’ve run out of time? Because we’re so busy doing all the things that make up our twenty-first century lives that the moments in between this, that and the other thing are just not long enough? Or is it because when we do stop – exhausted, brain dead, pooped, shattered – we fill the quiet with noise, or pull our gaze from the unfocussed distance to the blue screen?

The last time (perhaps the only time) I heard someone use the word repose, I was in Tuscany, working as a volunteer on an organic farm. Lunch was over, it had been drawn out and delicious and full of conversation, as lunch at Il Mulino tended to be, and our host, Ulrike, declared that she was going for repose.

‘I’m going for repose,’ she said. And she rose from her place at the old wooden table and left the room. Just like that.

I was cutting another slice of sourdough for my youngest son, cajoling my eldest to help his dad with the washing up, wondering if we’d have time to fit in a bit of home schooling before an afternoon tying raspberry canes – probably not, I thought.

I wasn’t really paying attention to Ulrike, but the word found its way through the clutter and the clang to settle in my consciousness and send out tendrils of longing. You know the feeling; that wave of recollection that brings colour and goose bumps to the surface of your skin. It might happen at the name of a first crush, or the smell of a favourite food, or the sound of a song you used to play over and over during the final year of high school. It’s a reminder of something you’ve craved.

Repose. Tendrils of longing, right to the ends of my fingertips, straight to the depths of my heart. I had been craving it for years, and there it was, in a farmhouse in Italy.

Repose can’t be taught – just the thought of wordy instruction is incongruous to the peaceful reflection repose allows – but it can be learned. With stealthy observation, the slowing of your step, the removal of your watch, and a comfortable chair, the state of repose can be yours.

At the risk of contradicting myself (life is full of such things and knowing when it matters and when it doesn’t is something a bit of mindful pondering can teach you), here is my recipe for Repose:

Like fresh truffle shaved onto scrambled eggs, this step is optional. Repose will come more easily if you are in Tuscany with a view of an olive grove and no need for a harried commute to work, or school, or the 24/7 Woolworths that never has enough parking. But if you can’t quit your job, or you’re worried the kids will fall behind, or return flights to Europe are beyond you, Repose can still be yours. Just follow the rest of this recipe with care, being sure to use the best quality ingredients you can find.

The wise woman knows the secrets of Repose. Of course, a wise man would be equally good, but my preference is for a woman with at least fifty years of living. She’ll have lines on her face and soft flesh will hide the muscle in her limbs, but her strength will be evident. You’ll see it in the way she kneads dough or pulls weeds. And you’ll notice it when she walks. Her pace is slow, but her movements are fluid and deliberate – she’s paying attention.

Now look to her expression. See how it yields to what is around her, like a ripe avocado will yield to the pressure of your hand and then return to itself. She notices things, but is not bruised by them – her head may turn, but without haste; her hand may pause, but without tension; this, that and the other thing are noted, but they do not interrupt. They will be tended to in their own time.

(Tended. A lovely accompaniment to repose, but a recipe for another time.)

Slow your step, your breath will follow. But repose is a little way off. It can occupy the moments between the things we do, but, like a good leaven, it needs time and constant feeding before you can be confident of the results. So practice, every day.

Repose doesn’t come at the end of the wise woman’s tether or when she’s had enough. It comes between satisfied and weary. Only then is it possible to rest the body but exercise the mind; to contemplate the past and imagine the future. The wise woman puts up her feet in the middle of this, that and the other thing, and enjoys the perspective it brings.

Your watch, your phone your alarm clock – they horde time and dole it out second by second, making it precious and scarce and something to fret over. Remove them, just for a while.

Close your eyes, or not, and feel the lightness of time unshackled. If you can avoid curating it with thoughts of this, that and the other thing, it will reward you with restful reflection and contemplation.

This is repose; the quietly acknowledged space between the last thing you did and the next thing you’ll do. It is the pivot on which your day may rest with perfect balance.

‘I’m going for repose,’ Ulrike said, as she rose from the old wooden table after the conversation of lunch had petered out.

I slowed my step, and my breath followed.

Published on line in Book Babble, Affirm Press May 2017